Artist of the Month

Our Artist of the Month for July 2020 is Vincent James.
We talk to Vincent about his practice and influences.

Tell us a bit about yourself and your practice, how would you describe the work that you do?

I’m Vincent James, an artist working in Todmorden, West Yorkshire and I make work based on objects appropriated from cartoons.  My work uses the props cartoon characters interact with and objects in the background.  I’m interested in the simplified language of these objects.  They are like the shorthand or idea of an object, easily recognised in the often fast pace of a cartoon.

I make sculptures, collages and animations and bring objects from different cartoons together to make something surreal, stupid or funny; hopefully all three. 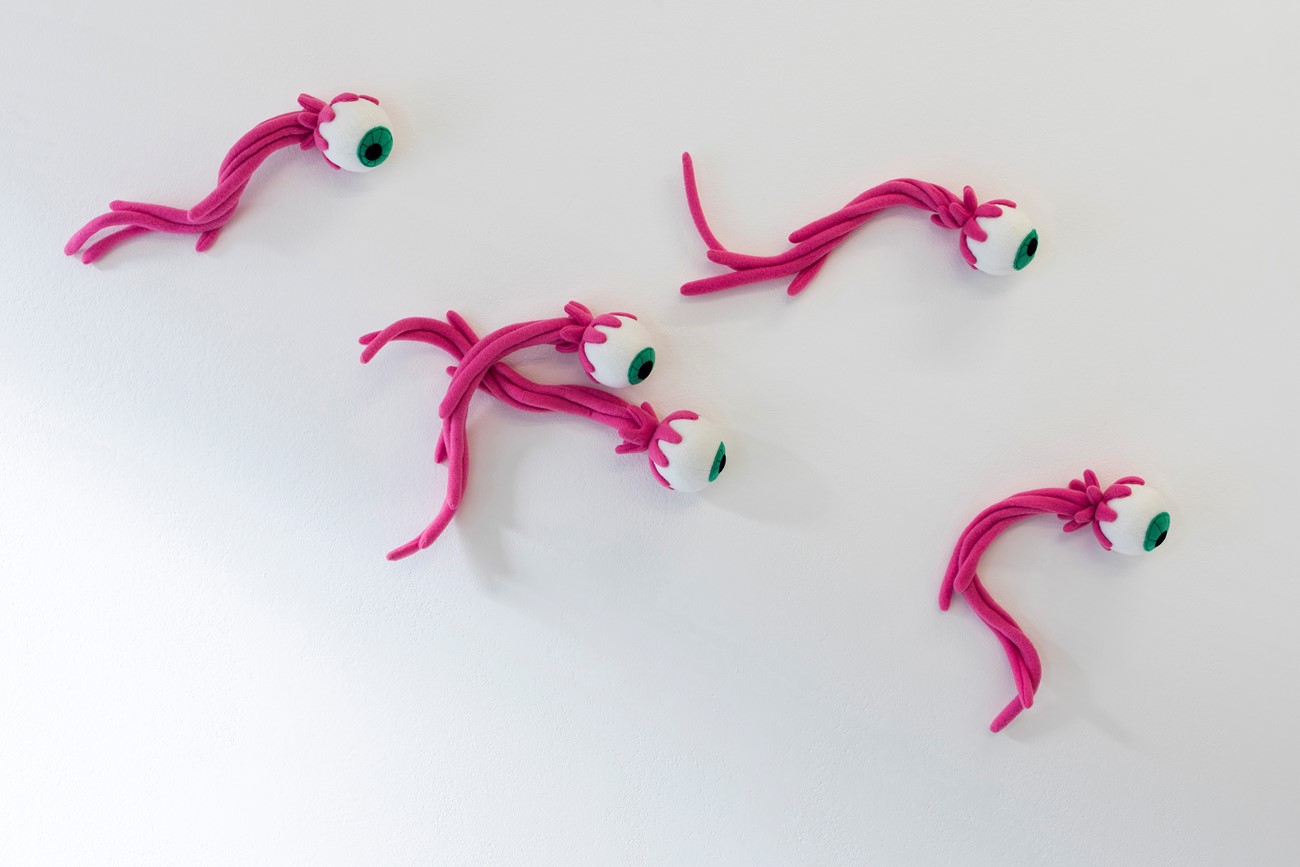 Could you tell us more about this process? How do you decide which objects to appropriate?

The things I appropriate are those where I feel the artist who originally made the drawing really captured the essence of the object being represented. The first cartoon sculpture I made was from a 1951 Tom and Jerry cartoon. It was an iron, one that is heated on a stove and quite different from the kind of iron we are familiar with today. Despite its distance from our everyday experience it felt like an ideal or iconic representation of an iron.

I collect the objects from cartoons by drawing them on layout paper. The layout paper is half way between paper and tracing paper and allows me to quickly trace a drawing and bring objects together in different configurations. These drawings can then become the starting point for a sculpture, collage or animation. Although I don’t use the characters from cartoons in my work I see this expanding catalogue of objects as a cast of characters, often appearing in more than one work in various scenarios. If the simplified world of cartoons is a language then the drawings of objects I collect is like an growing vocabulary that I use to tell different stories. 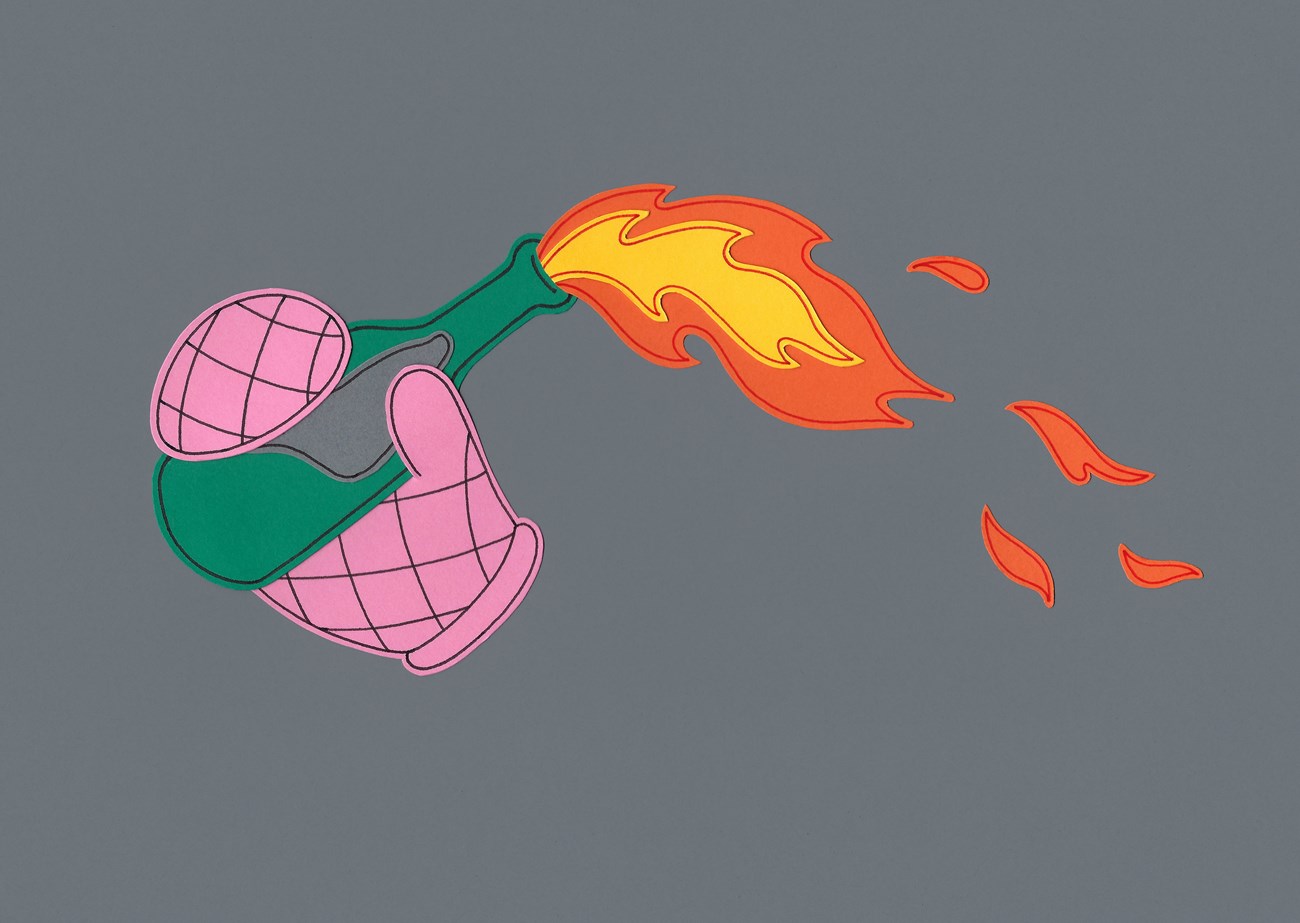 Some of your sculptural works such as ‘Bagged Up’ or ‘Tall Story’ draw attention to sculptural notions of mass and balance. They seem caught between our real-world physics and their cartoon world potential. I wondered how you negotiate these different physical worlds in your sculptural work?

Part of the the fun of the sculptural work, I hope, is seeing cartoon props transported from the two dimensional animated world to a gallery space and transformed into three dimensions.

Things that are balanced, propped and suspended are recurring themes in my work. The sculptures allow me to suspend a moment in time as with the ‘exploding’ noodles at the top of ‘Tall Story.’ The action is paused but the viewer can walk around the sculpture for different views of the the frozen moment. What led up to this moment or will happen next is left for the viewer to imagine.

‘Bagged Up’ is inspired by ‘Plank Piece I-II’ (1973) by Charles Ray. In these two photographs the artist is pinned up against the wall by a wooden plank in different positions. My sculpture replaces the figure with a bin bag which is leaking something toxic looking. I’ve used the bin bag in another piece that was slumped against the wall and I was surprised when I made it how human it looked. I think there’s both comedy and despair in the Charles Ray photographs. They are slapstick but the figures in both are trapped and isolated. I hope my work has some of the same qualities with slapstick or whimsical scenarios, objects isolated from their original environments and trapped in moments of time. 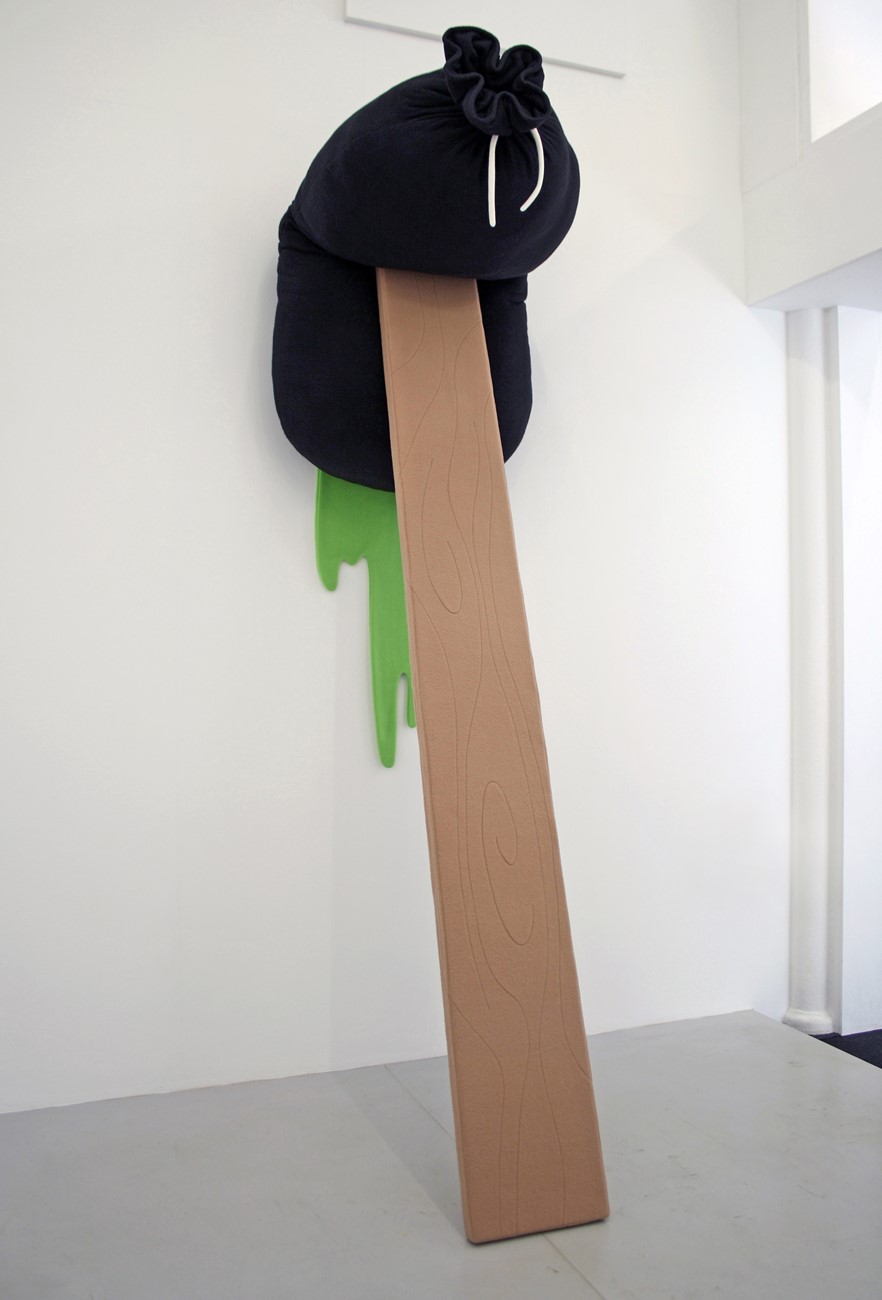 You work with a variety of different mediums as well as sculpture. How do these different processes inform one another?

When I started using cartoons as a source in 1998 I made sculptures of individual objects. At the time I was mainly interested in the translation from a cartoon image to sculptural form. I then began to bring objects from different cartoons together and this opened up more possibilities to create strange narratives and surreal combinations.

This led to working with collage and animation. An idea that I could not realise in sculpture could work as a collage or animation. I like to mix up these ways of making, with sculptures leaving a painted trail of cake or collaged smear of jam behind. Blurring the lines between drawing, collage and sculpture seems appropriate when making sculptural work from a two dimensional source.

I had worked with animation before but during my residency at PAPER Gallery in 2015 I animated cut-out collage elements in the gallery space for the first time, colliding the real and cartoon worlds as in my sculptural work. This idea took on a larger scale when I made three animations for Art Fair Suomi in 2017 in the big industrial spaces of the Cable Factory in Helsinki. I like the absurdity of taking the cartoon objects back into animation, completing the circle. I’ve also made sculptures that include projected animated elements which is an idea I hope to explore further.

Which artists working at the moment do you admire?

Tom Friedman transforms the mundane like cereal boxes, tin foil, plastic cups, etc, into something funny and fantastic.  Sarah Sze also uses everyday materials and creates sprawling installations and immersive other worlds.  I think a lot of art can be stuffy and serious but David Shrigley is the master of the stupid sculpture and his work makes me laugh. 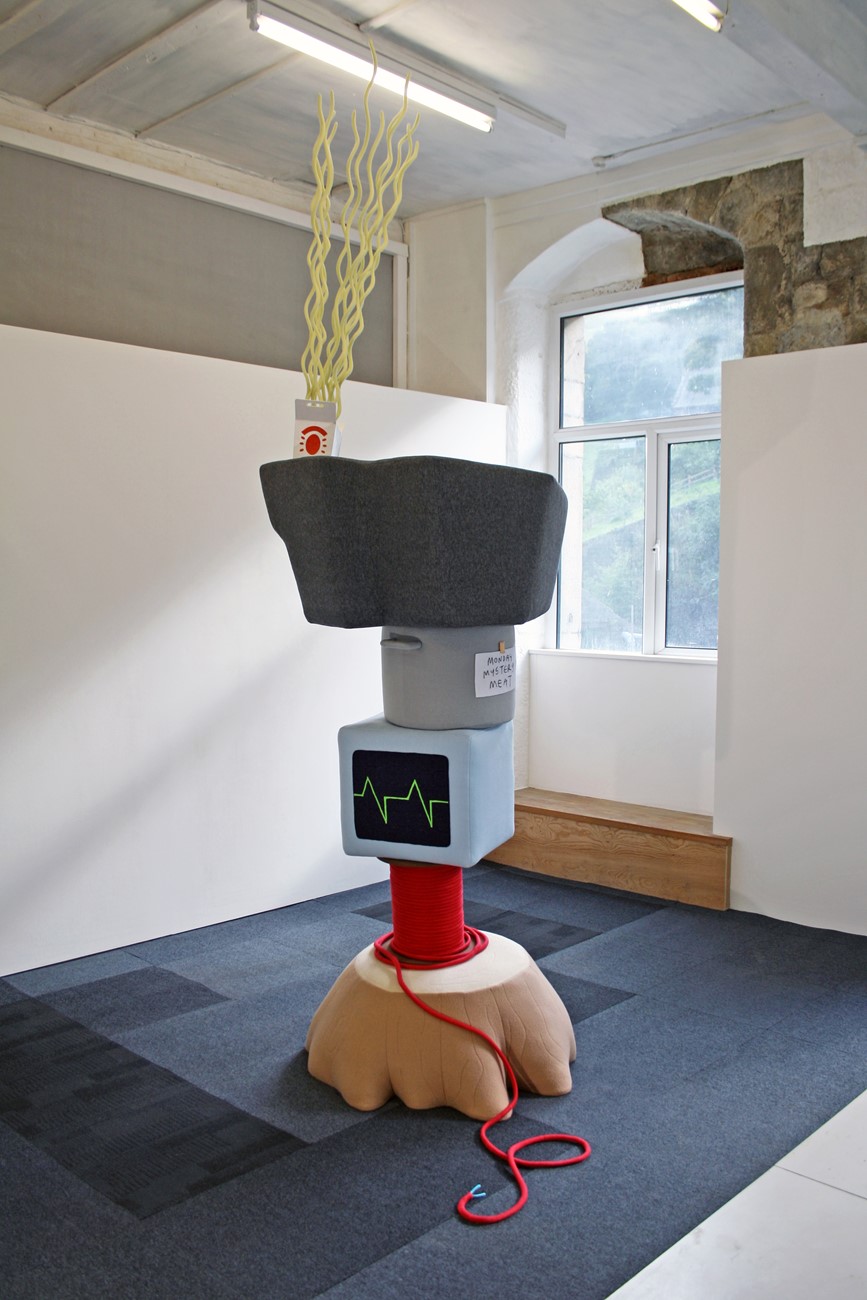 What projects do you have coming up?

I’ve been a member of the Yorkshire Sculptors Group for about three years now and I’m currently making work for ‘Invasive Species’ our next group show. It’s an open air exhibition in the RHS garden at Harlow Carr so I’ve been learning to sew with waterproof fabric. I’m planning to make an animation to go along with the piece which will be made outdoors. The show was conceived before Covid 19 and we are lucky that it can go ahead as planned. The exhibition runs from 29th August till the end of the year.

Paper On Wall make wallpaper created by artists and they will be launching later this year. I’ve made two collage designs for them and I’m excited to be alongside the great contemporary artists involved.

I’m keen to give my cartoon cut-outs the chance to explore and animate some interesting new spaces.  I have thought about creating site-specific animations in museums or heritage venues as a way of highlighting their hidden or overlooked architectural features and spaces.