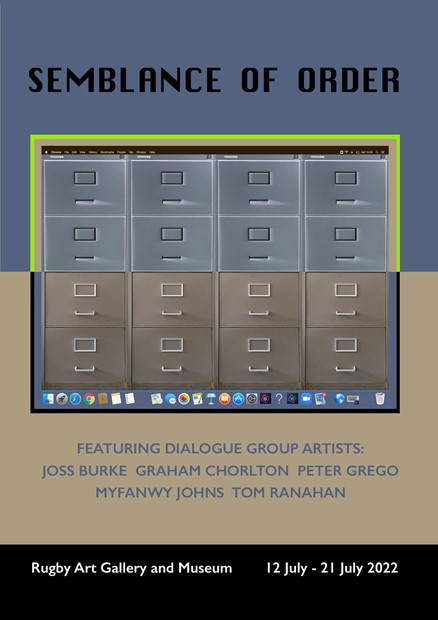 Semblance of Order
A Dialogue exhibition

The exhibition, Semblance of Order, looks at the artist’s relationship with personal and public archives and their constant engagement with the archival practices of recording, documenting and indexing, in the creation of new work.

Myfanwy Johns reflects on objects that populate the rooms in her home. She asks herself how they got there; thinking about how they seem to migrate to new positions in rooms often surprising her with their presence.

Tom Ranahan presents a range of photographs from his personal archive, recent photographs taken on a visit to Rugby in March 2022 and work from a number of ongoing photographic projects. They offer a glimpse into an artist’s working process; of selection, editing and presentation.

Joss Burke has documented her Cairnhill garden since 2009, marking the changing seasons. The views of Cairnhill, shown here, were created over a five year period from 2018 - 2022. Initially a site lacking in biodiversity due to intensive farming techniques, it has become a space of experimentation, research, and observation.

Graham Chorlton presents paintings derived from photos taken from a computer screen of webcam images from around Europe, accessed during lockdown. These depopulated places somehow mix the mundane with the exotic, becoming images of longing and desire: somewhere else.

Peter Grego offers images of hats that belonged to his mother in law. After her death in 2020, the hats were collected together, boxed and stored. An archive of objects and memories from a long life.